In keeping with the Halloween theme, I recommend another creepy short film based on Poe's The Tell-Tale Heart. It stars Joseph Schildkraut as the abused worker who takes revenge on his cruel master and lives to regret it.

The film is very atmospheric, and will make you cringe at the tension and the knowledge of what's under that floor! Schildkraut makes the whole sordid tale worth watching. You feel for the character but you're creeped out by him at the same time.

I once read The Tell-Tale Heart out loud in 8th grade English class. Looking back, I can't imagine where I got the nerve to do that. LOL I was the shyest girl in school. But apparently a few of the kids enjoyed my performance. Maybe I should've been an actress.

My second son, Gabe and I watched a little gem of a horror story that I recently recorded off of TCM. It is called Return To Glennascaul; it stars Orson Welles as himself, talking to a fellow who tells him a spooky tale in Ireland.

The very simply made short film is a treasure for Halloween viewing. Just the perfect respite from everything that's going on these days.

The Irish fellow relates how he met two women, an older lady and her grown daughter, on the road a year before, and took them home to an elegant Victorian mansion. He had a drink while they made their tea. The daughter was drawn to his cigarette case, a gift from his dead uncle, in which the uncle had enscribed a verse from Song of Songs to his lost love, Lucy.

The man left, forgetting his case. But when he returns to retrieve it, he finds the house is closed up and vacant. He seeks out the real estate agent who tells him the house, Glennascaul, had belonged to a woman named Campbell, and her daughter, Lucy - but both had died long years before, in their old age. Could she be the same Lucy whom his uncle had loved and lost? Oooooh, creepy!

I am determined to celebrate each holiday this season as normally as possible. Of course, we don't have what most people would call normal celebrations anyway but they suit us.

I want off of this roller coaster ride! The constant up and down and all around is literally making me sick.

I want to breathe easy again, and not have to wake up to yet another scandal, another cruel horror, another useless cycle of misery and death and destruction.

We are at the mercy of deliberate monsters. And the saddest part is watching family members accept the lies as truth.

Stop the madness. VOTE the monsters out!

I am renovating my blog, just for the heck of it. I need to focus on my writing and stop worrying over things that may or may not happen. If the worst does come we will face it. That's all anyone can do.

At least I voted - by mail. I am ashamed to admit this is my first time voting in any election. I grew up thinking that my vote did not matter, even though both my parents were voters. But we all must try, no matter how dismal the prospects look.

So many people in the past struggled to claim their right to vote. I had the privilege my whole life and ignored it. Is that a white person's privilege? Yeah, I think so. Again, I am so ashamed that I didn't see how important it is to make my choices known.

I only hope we can reverse the insane course this country has been on for the last few years. My Lord, how anyone can look at those in power and not be enraged at their cruelty, their greed, their stupidity, is beyond my comprehension. Damn, people, wake up and smell what they are shoveling! (To paraphrase a quote from Die Hard - got to throw in a movie reference, because, me, you know...)

I watched a wonderful little film on Saturday called Tsuruko's Tea Journey. It was on the NHK channel, one of my favorite places to soothe my soul. This documentary will inspire you to do something meaningful, with grace and calm and determination.

Tsuruko, a chef and expert at performing the Japanese tea ceremony, travels to Germany and meets people with interesting, sometimes sad stories of their lives and losses. I was extremely moved by her sharing a tea ceremony in honor of peace with a family who were mere children during WWII. She had her own tragic memories of the great war, as most people do who lived through it or its aftermath. Knowing from historical films and books just how horrible the world was then, this quiet coming together of souls gave me hope that someday our children can come together in peace.

The scenery alone in this film will transport you away from your worries. And Ms. Tsuruko's words as she explores the forests and gardens of Germany are like poetry. I wrote down something she said: "Every person is a once-in-a-lifetime encounter." She is an amazing woman.

If you are willing to take the time to get to know someone, instead of judging them by their looks or their station in life, then you might be pleasantly surprised and make a new friend. And we could all use a few more of those.

When I was a girl I adored Mrs. Emma Peel on The Avengers. She was everything I dreamed of being someday - intelligent, sophisticated, humorous, beautiful, tall, fashionable, fun, and adventurous. Plus she could kick the sh*t out of any nefarious man who dared come her way. I was beyond ecstatic when a friend then an older cousin both said I resembled Mrs. Peel (we each had brown eyes and brown hair and there was a similar shape to our faces). She was the coolest character I'd ever seen on TV. And there's been no one ever who could replace her.

I watched Diana Rigg through the years in films and other projects, always wonderful, perfect, glorious. I think my favorite part is the one she played in Evil Under the Sun, an adaptation of a much-loved Agatha Christie novel. She seemed to be having a great time playing against type as Arlena, the wicked musical star. It was a joy to behold. Actually that whole film is a welcome vacation from reality, murders and all.

This morning I learned that Diana Rigg had died. I started cussing and beat my fists against the chair arm. Yeah, 82 is a good age to reach. We'd all love to make it that far. Sure we would. But I just feel like all of the gifted, magical people are exiting this world, and there is no one to step up and take their spot.

There is no magic in Hollywood anymore, in spite of all its computer graphics and multi-million dollar budgets. The people in modern movies look like the guy that checks you out at Home Depot or the girl who signs you in to see your podiatrist. (A notable exception - Gal Gadot. She is gorgeous, talented, smart, wow!) Maybe after you get to a certain point in your life nothing seems special. I don't know. It's possible. But maybe it isn't me. Maybe it's just the times. ~sigh~ 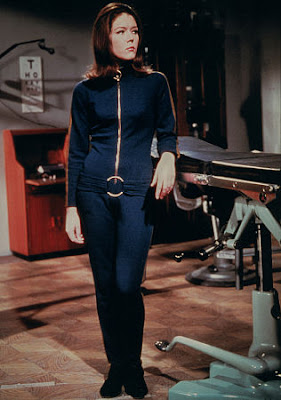 My dad was in the Army when he was young. My uncle was deployed in the South Pacific in WWII, my other uncle, their little brother, served as well. My mom's sister and her husband were a military family; their girls were Army brats. My brother joined up when he was a teenager, and traveled all over the world. My niece's daughter was in the Navy, as was her stepfather. There were also several people on my husband's side of our family who served.

NONE of them were losers or suckers. They felt a call to duty, or they were drafted and served their country well.

I despise war. But war is not started or glamorized by the soldiers. Most of the time wars are started by cowardly dictators who use others to carry out their dastardly deeds. Then soldiers on the other side are called upon to fight for decency, democracy and freedom.

Humankind is stuck in an endless cycle of violence, terror and misguided faith. If you put your faith in a would-be dictator, you will only get violence and terror. History shows us this pattern over and over and over again. Yet here we are. When will people learn from past mistakes?